Here are the photos of my sons Vimy Ridge model project. We stuck to simple painting techniques, nothing too fancy because I wanted him to be able to do it himself. The board had a base coat of mud brown, one dry brush of graveyard earth highlight, and two washes to bring out the detail in the ground. After it was all dry he added flock and stones with white glue and water mixture. 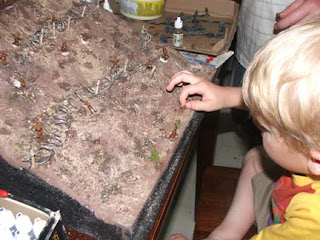 The same went for the miniatures themselves, they just had a base coat of the overall colour of the uniform, then he painted the faces and hands flesh, the rifles and boots dark brown, and a wash of citadel flesh wash to add some depth to the figures. 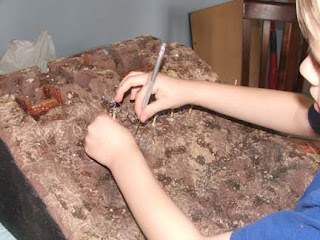 He made the barbwire by wrapping wire around a wooden spool and then wrapping it around matchsticks for the posts. The roof of the bunkers were made from corrugated cardboard. 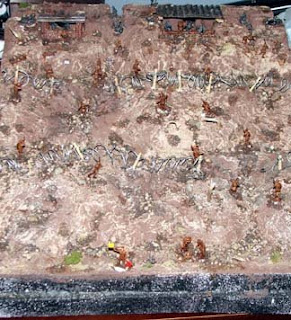 I just came across this exclusive spoiler about the new Hulk movie. Apparently Marvel studios is continuing it's cross-marketing scheme with it's characters and has put a scene in the new Hulk movie with Captain America. Unfortunately the clip was cut from the theatrical version but http://www.comicbookmovie.com/ has managed to get their hands on the clip.

Warning: apparently part of the reason for it's omission was that the course language would bump it from PG to AA so beware of the harsh language; not intended for young viewers! Maybe they'll put it in the DVD.

Here is the video:


James VS
Posted by James Van Schaik at 5:24 AM No comments:

The Skills to Pay The Bills?

Often one of the most difficult parts of being a freelance sculptor in a industry where many of the companies have very little regard for the artist is getting paid. Add the fact that there are a lot of amateurs who are willing to work for next to nothing just to get their work out, and the end result is that those of us who do the job for a living often get undercut by people who don't depend on sculpting to feed their family and make money. Recently, the arrival of cut rate sculpting services from China has made the situation even worse. Some artists are independently wealthy or have spouses with high paying jobs and have sub-par rates as a result.

Often companies expect the artist to work for free and have the opinion that they are doing the artist a favour by giving them exposure. When you do ask for proper compensation they end up turning to one of the above mentioned cheaper sources. Often companies just don't pay their bills on time or put off paying for months on end. I don't know how many times I've had a company with long outstanding debts just leave for weeks on end without paying their bill. It's usually at times where you need the money like Christmas; the convention season is also a time when this is a common occurrence. I've often wondered what some of these people would say to their boss who left town the day before payday and said "oh by the way, I'll be off at Gencon this week so I'm not going to give you a paycheck".

What any artist should realize when they undercharge or low ball a price is that they are taking food from the mouths of my children, not just my own but every other professional sculptor out there who depend on their trade to pay the bills. Any new sculptors who low ball are really only hurting themselves because once you charge a company one price they will never, ever, give you a higher rate; you are just locking yourself into a low wage. There is always another desperate artist waiting to give them what they want for next to nothing.

The sad part of this environment means that there will be fewer and fewer professional sculptors in the gaming industry as it becomes more and more impossible to make a decent living from sculpting. The death of the metal miniature, and rise of the cheap, pre-painted mini sculpted by a cut rate, sub par artist from China will also drive many of the great sculptors into other lines of work.

My wife is a writer and unfortunately the writing Field is afflicted with the same rot that plagues the gaming industry. She found this video on one of the writing sites that she visits, which is an interview with Harlan Ellison and he eloquently sums up how I have felt for many years. My first reaction after seeing it was "Amen to That," then I wrote this rant. Here it is, he is talking about writers but if you swap the word writer for sculptor it is the same situation. I'm sure my peers will truly appreciate this.

One word of caution, this isn't a video to listen to at work or if you have your kids present.

One of my favourite hobbies has always been terrain building. I think it reminds me of when I was a boy and my dad would take me to one of his friends house whose elderly parents lived in the upper story. His father was an avid model railroad enthusiast and his entire attic was converted into a giant model train display; complete with towns, mountains, and real working lights. I used to spend hours there playing with those trains and I guess that's why I like building terrain so much.

One of my favourite boards that I built was a section of Omaha Beach from D-Day for a huge game a friend and I ran over the convention season a few years ago.

When my 6 year old son's school sent home a notice about a model contest at the local museum I jumped at the chance to help him build a model. The criteria was that it had to be a significant person , place, or event from Canadian history. We gave him several examples and options to choose from like D-Day (one I personally was rooting for), the war of 1812, the Canada Arm, The Trans-Canada railroad, Terry Fox and Vimy to name a few. He chose Vimy because he liked the fact that it was the birthplace of Canadian National Identity and Pride.

I wanted to make sure he did the model himself so the only role I played in the making of this was using the sharp tools and showing him how to do each step, he did all the work himself. 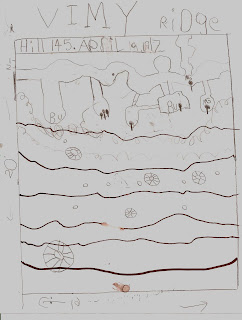 Here is a scan of his blueprint. He wanted more machine guns and "Lasers" but I tried to keep it realistic! 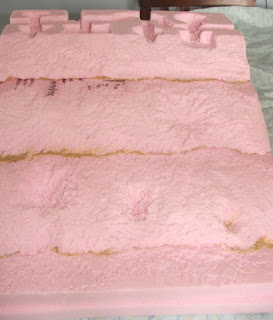 Here is the first step after cutting and gluing the base foam shapes. The material we used was pink Styrofoam insulation. Once the layers were glued down he coated it with plaster of Paris to fill in the seam lines and create a rough "mud" texture. Once he layed the "PoP" down he just took some rough grit sandpaper and dabbed the surface to give it the rough look. 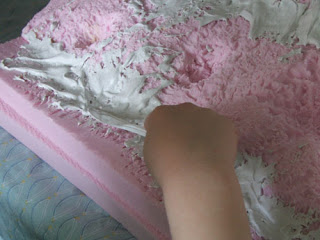 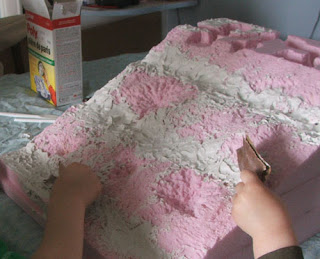 Once that was all dry he primed it with a base coat of white house paint. 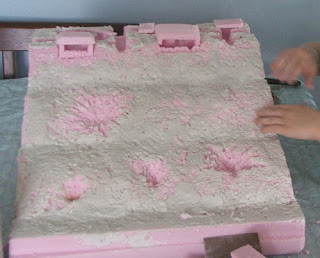 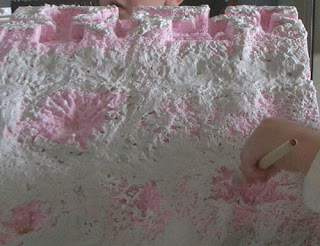 James VS
Posted by James Van Schaik at 5:36 PM 1 comment: